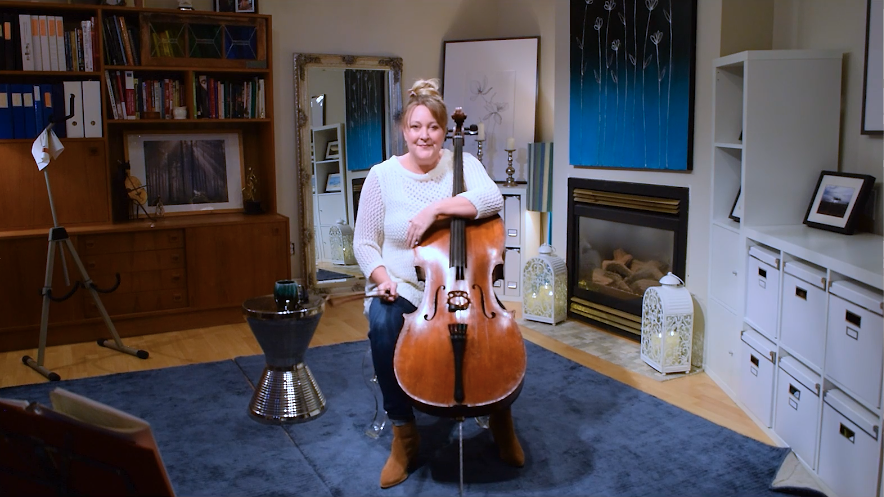 I love scales! As a teenager taking lessons the value of scales went right over my head. If I had known then the value that scales provided to a student I definitely would have practiced them much more diligently. I now know that scales are a wonderful tool and provides an easy way to learn or practice a new technique with the ear constantly monitoring the scale to let us know if we are off. Scales have a sequence of intervals that remain consistent no matter where you start which is why I think they are so terrific to use to learn a new technique.
Today I am introducing a position called fourth position using the G major and the C major 2 octave scales, both starting in the fourth position. Becoming proficient in these scales will give you a nice start to learning and exploring fourth. I like to start the scale descending as I believe it is a bit easier to formulate the right shape from the start and move to the more familiar first position, the unfamiliar to the familiar. The expectation is that proceeding in this manner will provide the proper time to feel comfortable in fourth before attempting the scale both ascending and descending. The most important thing you can do is set your hand and arm shape up properly in fourth until it feels effortless and comfortable. If your fourth position feels too ‘cramped’ on the A string (G Major scale) I’ve included the C Major scale starting on the D string in hopes it will be a bit easier to feel comfortable on this string and then translate that feeling to the A string and attempt the G scale again. I’ve also included some bowing and left hand concepts at the end so that you have a few different ways to practice the scales. These are great to add in as a challenge once you feel comfortable with the left hand function. If adding these in ‘derails’ your left hand, go back and work a bit more and then try again. I hope you enjoy today’s tutorial on G Major scale, introducing fourth position!
Return to Technique Tutorials page